The initial talks between an author and an illustrator about the style of the illustrations is always exciting. It’s where ideas are discussed, colours debated and styles suggested. It’s the process that brings the characters to life. I had some quite clear ideas about what I wanted Victoria to look like, as did my illustrator, Sarah Leigh-Wills, but these changed over the course of the books.

Initially I visualised Victoria wearing more Victorian style dresses, long skirts and hats, but with a slightly more modern twist. She didn’t have to be trendy, but she did have to be funky and fun. We then decided to change her outfits and style to reflect the places she visits, rather than keeping her the same in each of the books. I threw some ideas in the air and Sarah drew some sample sketches. I loved the idea of dungarees and then happened to see a bright pink flower and instantly knew that was the right colour for them to be. It was also similar to the bright tops the Globe stewards wore, which made it even more appropriate.

Hats are a bit like props in a stage show – they have a life of their own and you have to remember where they are. Are they being worn? Are they being held? If so, in which hand? Have they fallen off? If so, where have they landed and how do you get them back? I believe Sarah had fun and games with Victoria’s hat in one of the books!

Here are some of the original costume illustrations for Victoria and Hamlet. They are quite fun to see as it shows how characters and ideas develop. 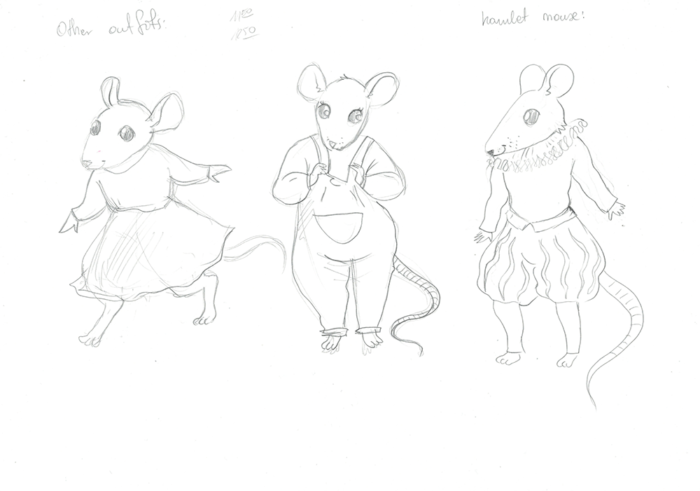 Join my newsletter and stay up to date with book releases, events and news!